Our new principal of Wood Memorial High School, Kevin Smith, has high hopes for the school year.  He graduated from Springs Valley High School in 1977.  He attended Oakland City University and received his masters and is currently working on his doctorate.  During his life he has been involved in the following: sports broadcasting, sports writer, an IHSAA Official, varsity baseball coach, all the way down to a grocery store manager.
Mr. Smith is very involved with keeping himself fit and healthy.  He rides bikes, and likes to get all the strength and cardio training he can.  He holds athletics very high on his list, but wants to be known as an education-based athletic program before anything else.
When asked why he wanted this job at Waldo J, he said, “To be with a wonderful group of students and a staff ready to soar to a higher level of educational success.”  Mr. Smith’s goals this year are to be a resource for the students, faculty, and even the community on a personal level.  He commented, “I am committed to challenge each of us to raise our expectations to the highest level.  We must expect more of ourselves- character, instruction, and learning– if we are to move to be the best of the best on the basis of educational success.”
He has many passions but faith and family come first and foremost.  His two grandsons, Elliot and Oliver, music, baseball, and learning are things he loves as well.  Mr. Smith said this, “John Wooden’s favorite quote came from Ghandi; Learn as if you were to live forever; Live as if you were to die tomorrow.” 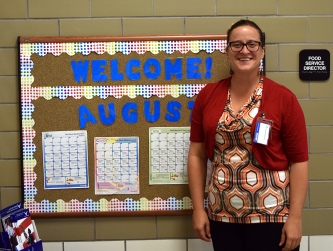 What are your thoughts on the food at WMHS?
Allison thinks the food is very nutritional and tasteful for the price.
A regular meal, at the price of $2.55 for 7th through 12th graders, consists of:
1 entree
1-2 vegetables
1-2 fruits
1 milk
* a minimum of 1 fruit or veggie is required with the purchase of a meal
Common Prices
Aquafina bottle of water – $1.50
Scooby Snacks – $.50
One slice of pizza – $2.55
Large Rice Krispie treat – $.80
Bag of chips $.80
String Cheese – $.75
How are you changing the menus?
Allison does not plan on changing the menus much, but she says she may add some various a la carte items.
What does Allison want to see our students partake in?
She wants the students to participate in the breakfast that is offered more, 100 students partook in breakfast on 8-18-16. She says that more students should take advantage of the $1.25 nutritional breakfast.
What made you want the job offered here at Wood Memorial?
Allison has always worked in the food industry, she wanted to try more of the management side of things. She was previously a cook at OCU, and she also has a degree in Culinary Arts from Sullivan University.

This school year, there have been many changes to the school’s student handbook. These changes include the new policies:  Sustained Silent Reading (SSR), schedule changes, updating to the grading scale, Trojan Pride, allowing students to eat lunch on the track, and even some modifications to the dress code. These new policies and changes are all thanks to our new principal, Kevin Smith.
Mr. Smith was asked why he decided to include SSR. He felt that students needed to be provided the opportunity to improve their reading skills. He believes reading for fifteen minutes in the morning helps students get in the right frame of mind. He also stated that there have been other schools that have done this, and it was successful there.
When asked about Trojan Pride and its purpose, Smith explained that it gives opportunities for students to get help from teachers. It can also be used for club meetings, teacher meetings, study time, test retaking, pep rallies, and anything else that is needed.
The new grading scale now allows for students to have an A+ if you have a 99-100 percent. Smith was asked him why A+’s were added to the grading scale and he explained that the addition of the A+ to the grading scale will motivate the A students to strive to be even better, and to become an A+ student. Mr. Smith also stated that he worked with the National Honor Society Students over the summer on how to improve the grading scale, and it was the students that made the suggestion to add the A+ to the grading scale.
Many students have questioned the new dress code rules that don’t allow book bags, gym bags, purses, coats and athletic jackets in the classroom. He explained that these new dress code rules are there for safety reasons. The bags take up space, could be a problem if there is an emergency, and they can get in the way of students and teachers walking through the classroom.
Students are now allowed to go out on the track during lunch. Smith said that he knows some students get bored in the lunchroom if they finish eating early, and that some students don’t like sitting inside the whole time so this gives them the opportunity to get outside and get some fresh air and exercise. He reminds students that this is a closed campus, and students are only allowed to go to the track, and are not allowed to leave the school until the school day is finished.
Students are now allowed to have phones out during lunch, and in the four-minute passing period. Mr. Smith explained that he wants there to be a trust between student and teacher. If the teachers are allowed to have their phones then the students should be allowed to have phones as well. He also understands that if there is an emergency, the students would prefer to have their phones with them.
Some students are confused about the new bell schedule and why there are four-minute passing periods. Mr. Smith explained that the bell schedule is the way it is because he wanted to make sure we had time for SSR in the morning and Trojan Pride in the afternoon. These times were not picked for any particular reason other than that it was just the way it worked out.
The final question Mr. Smith was asked was how are these changes going to affect the school. He believes that these changes will help change the school for the better, and improve students’ education.